McNary Yacht Club is a part of 3000 acres along the Columbia River that Charlie Kik and his family purchased from the Northern Pacific Railroad in the early 1940’s. The area was called “Hat Rock” because of a unique rock formation sitting at the highest point that looks like the top of a cowboy hat!

Charlie appreciated the beauty and draw of the area and knew that others would to. By the late 1940’s he decided to start a “boat club” and his ad in the Hermiston Herald inviting others to join in the project drew quite the crowd! From this first meeting, the wheels were put in motion for an all-volunteer driven initiative to create a recreation area along the Columbia River that they would call the “Hat Rock Boat Club”.

Charlie and his dad, used their D8 caterpillar and carryall to scratch out the roads in what we now know as Hat Rock State Park, Hat Rock community and McNary Yacht Club. Over the next several months people from Umatilla, Hermiston, Pendleton, Lexington and Ione would bring their loaders and dump trucks to haul rocks to the levies and create the recreation space we know today.

Over time, the club was renamed the McNary Yacht Club and all the property in and around the Hat Rock State Park was acquired by the Corps of Engineers. We continue to enjoy this area under the guidance of the Corps of Engineers and are so grateful to Charlie, his father and the countless volunteers who helped make McNary Yacht Club the best place on the Columbia to unplug. 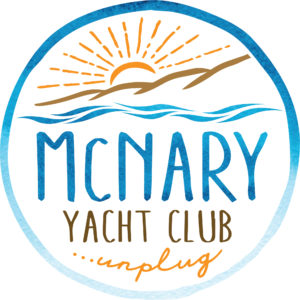